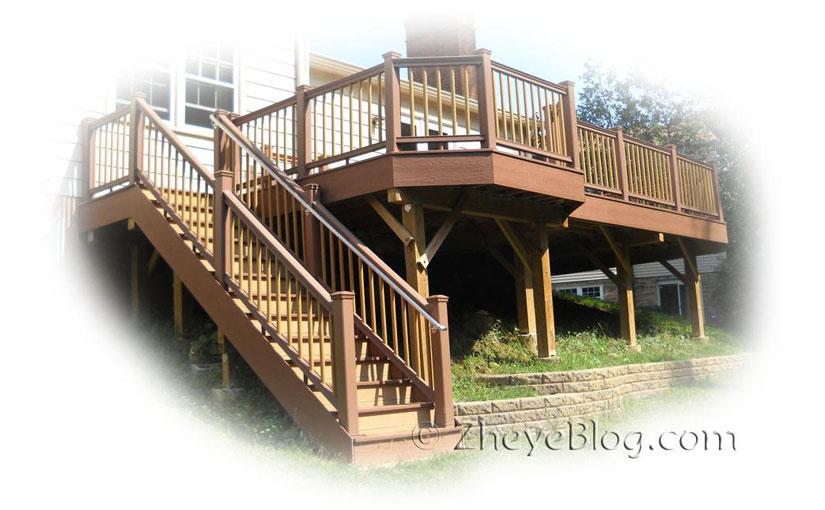 The next step was to design the deck. My friend, who proposed me to do-it-myself, told me it cost him about $2,500 to hire someone to make five drawings. He asked me if I planned to hire someone to draw the plans; he also told me when he went to the county to get his permit he saw many people had drawn theirs by hand on paper without even using a ruler, and that the clerks were very patient helping people modify their plans. I told him I was going to draw my own plans and he sent me his over the Internet to use as a reference. I also reviewed the drawings in the deck-building books, and the requirements in the Details, then got the ideas how to make my drawings.

I decided I was not going to draw by hand on paper. It was hard to modify drawings on paper, and, often, you had to re-draw everything. Since my work is computer-related, I would make my drawings with computer. To draw plans on a computer, I need proper software. Some websites offer deck design software for free. I tried some but found their capabilities were too limited, so I purchased a simply deck design software for dozens of dollars, but it too was unsatisfactory. Finally, I decided to use Microsoft’s Visio to draw the plans line by line. Although it might be slow, it was much more flexible.

Construction began. I hired two men to remove the damaged deck. They did a great job, and the site was cleared very well. 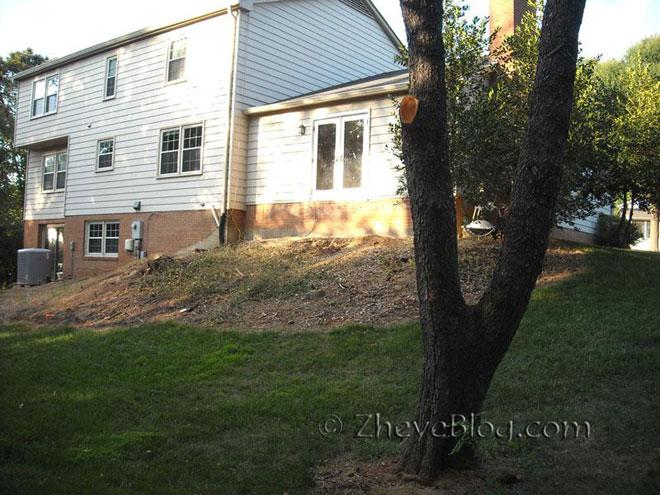 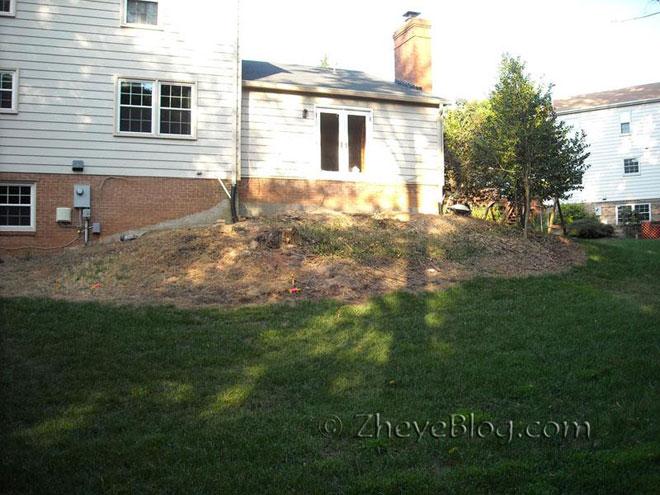 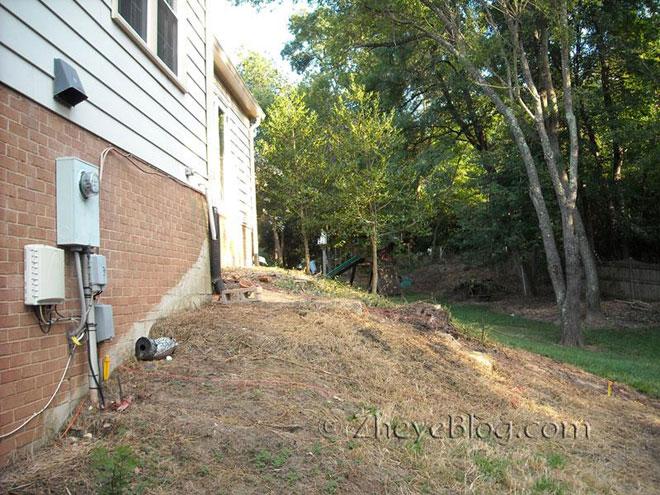 Before proceeding with the design, I called Miss Utility. The technician marked the ground for buried power and utility lines.  This is a requirement before undertaking any digging in the backyard, and ensures that I do not put new deck footing on a power or utility line in the design, and avoids breaking a line when digging footings.

With one measuring tap and one long wooden stick, I got all the measurement I needed and started to design.

The old deck was only 18 ft. x 14 ft., and attached to one part of our house as shown in the following picture which were taken in 2004 when we purchased the house. 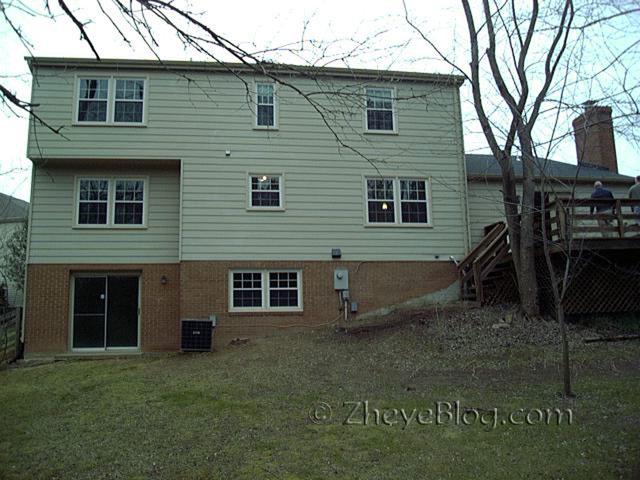 As shown in the picture, there had been a big tree next to the old deck. We worried this tree might damage the house, so we had it taken down the first year after we moved in. It was very lucky that we had done so. Otherwise, what got damaged in the storm might be not only the old deck, but also half of the house.

Now that we were going to build a new deck, and there was plenty of space, so we decided to enlarge it. Boss wanted the deck to extend across the entire back of the house; I said at most the deck could only extend as far as the electrical meter. Had it extended to the electrical meter, the deck would be below the kitchen window and would block partial view of the backyard. To improve the sight line, I designed the whole deck to be one step lower than the old deck, so added a step at the family room entrance to the house. After I figured out how the deck stairs land on the ground, the size of the new deck was set. To give the deck some characters, I designed a diagonal  corner-cut layout with separate edging. Since EverGrain offers color options, I decided on a two-tone deck. I sketched on paper several times trying out several options, and finally arrived at following shape and colors.

When I first showed the drawing to Boss, she asked if I could really build such fancy deck? I said let me try.

The next step was to decide where to put the footings, how to lay out the beams and joists. I had to come back to the Details many times for reference, then I could start to draw. I found that the drawing process was actually the process of thinking through building steps. In the first set of drawings, all joists were parallel to each other. But I found out that required a lot of work, so I turned one side of joists and beams by 90 degrees, and that became the final design.

I spent 2 or 3 hours a day working on Visio for 2 or 3 weeks, and printed out 12 drawings. (Click the small pictures below to see large drawings.)

After attaching name and address information, the application for county permit were ready . On August 25th, I took the application to the Fairfax County office. After about two hours going to four windows, I got the four stamps I seed, and  finally, I got the permit. 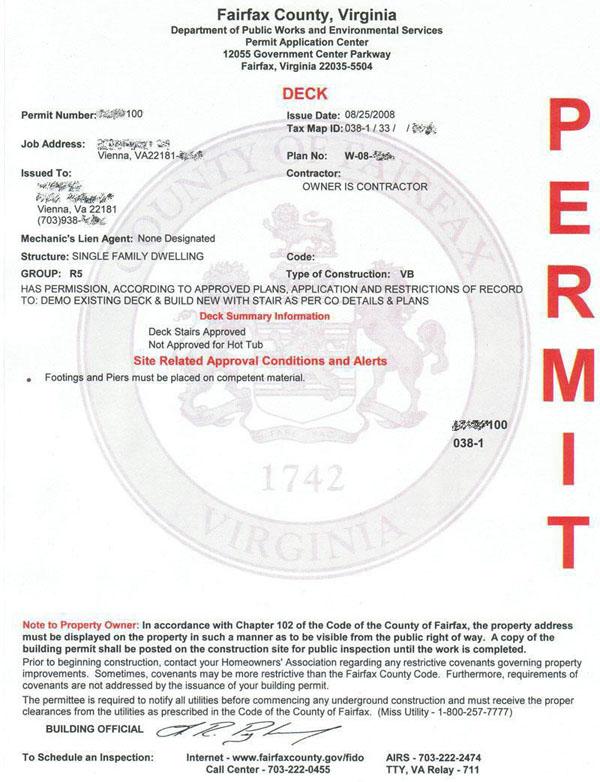 Building the deck also needed approval from our Home Owner Association (HOA). I emailed the files to HOA. They checked with neighbors on both sides to see if there was any objection to the deck. In a few days, I got HOA approval.